The first Saturday of the new football season, was once a beautiful event that saw hope and expectation within clubs of all sizes across the land. This was a time before the wealth of a select few, put them in a different stratosphere to the vast majority of clubs.

1983/84 was a season in which this gap probably existed, and had begun to grow, but not yet in the calamitous fashion that has made modern football all too predictable, and boring.

The fixture computer had seen Luton Town – who had escaped relegation on the final day of the previous season – with a tricky encounter against Arsenal at Highbury. The Gunners were showcasing their new £750,000 signing from Celtic in Charlie Nicholas.

The Arsenal programme has been re-imagined for the new season, and the aim was to keep Arsenal fans connected to the workings of the club, to a greater extent. The new editor – Kevin Connelly – went to every effort to create more of a community feel to the pages of this 24-page programme. 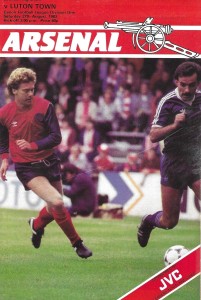 This edition includes a front-cover that features Tony Woodcock wearing a red and blue shirt, in a pre-season friendly against Aberdeen. This was a Jubilee match for the Boys Brigade, who supplied the kits for the afternoon. Arsenal won the match, 0-1, in case you were interested.

Peter Hill-Wood writes a message to supporters, in which he welcomes the club’s new signings – Charlie Nicholas, John Lukic and Ian Allison.

The Fanfare page mentions the novelty of fans attending matches at Highbury, from Norway, while fans were urged to send in requests for the club DJ to play before kick-off. The price of a postage stamp was all that lay between hearing your favourite song being combined with  stray shot from Graham Rix.

The match mascot is featured on the Junior Gunners page, seven-year-old Daniel Quy. I would be interested in speaking with Daniel, if anyone knows where he is now. It would be interesting to hear about his experiences of the day, and whether he still follows the Gunners.

There are the usual focuses on the opponents, and a look back at previous fixtures between the clubs, before we are treated to a full-colour centre-spread featuring Charlie Nicholas. Amongst other things, we learn about his love for U2, Psychedelic Furs and Depeche Mode.

Highbury Hotline gives fans the opportunity to write letters to fellow fans, before online forums were even imagined. Fintan Bloss from Cork, was searching for a matchday programme from April 1979, between Arsenal and Norwich City. I hope his search was fruitful and his collection is now complete.

I could not let this opportunity pass, without commenting on the advertisement for JVC below. It is in incredibly bad taste and this appalling idea for an advertisement, would never receive approval nowadays in the light of concerns regarding mental health and well-being. 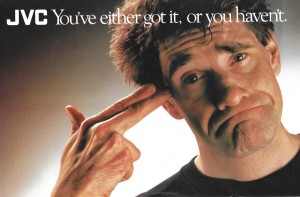 It is such a relief that we survived Thatcher’s consumerist Britain, although looking at the state of politics nowadays, I am not sure how far we have progressed…

The biggest scoops of the programme come on Kevin Connelly’s ‘Highbury Scene’, in which he reveals that Kenny Sansom will be sporting a beard:

“Yes it’s true, I grew a beard in Djakarta, on the Indonesian tour, and I liked it so I let it grow. My wife thought it looked good, so now I’m sticking with it!”.

Other features in the new-look programme include ‘A View from the Dressing Room‘, with David O’Leary, ‘Golden Gunner‘ that remembers the career of George Armstrong and a puzzle page that includes a crossword. I have included a scan of this below, should anyone care to try it.

This YouTube video is well worth a watch as it features coverage of the game that was broadcasted by London Weekend Television as part of their Big Match series.  Unfortunately, the Arsenal line-up is missing from the beginning of the video, but you will soon pick up the players involved if you watch the video in full.

After writing this detailed review of Arsenal v Luton Town from over 30 years ago, I suddenly realised that I need to rediscover a purpose to my life.  It is all well and good to have a genuine passion in life, but this cannot be all consuming. I just feel that I need to find that illustrious missing piece of my jigsaw of life, after I have enjoyed the video above that is…

The new season is almost upon us, and I thought it would be a good idea to give us all some context as we enter the 1983/84 season. To do this I have used the Milestones Diary from the Rothmans Football Yearbook 1984/85 with thanks and appreciation to the authors, who were edited by Peter Dunk.

I will be updating this milestone diary every month as season 1983/84 progresses.

21 Watford refuse Sheffield Wednesday permission to approach their manager, Graham Taylor, in search for someone to replace Jack Charlton.

22 Charlie Nicholas, Celtic’s leading goalscorer, signs for Arsenal in £750,000 deal. Nicholas had also been sought by Liverpool and Manchester United. 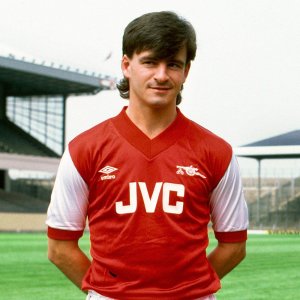 28 Spurs sign Gary Stevens from Brighton and Danny Thomas from Coventry for a total of £600,000. Stoke midfield player, Paul Bracewell, is transferred to Sunderland for £225,000.

3 Liverpool sign Gary Gillespie for £325,000 from Coventry while Arsenal are disappointed by their failure to secure the Scottish defender.

5 Everton complete the transfer of Trevor Steven, Burnley midfield player, for £300,000. Kevin Reeves goes from Manchester City to Burnley in a deal valued at £125,000. Three years ago City paid Norwich £1m for this player.

6 Draw for the First Round of the three principal European cup competitions is made. Liverpool are to meet Danish club, Odense, in European Champions Cup. Dundee United appear to have easy victims in Maltese champions – Hamrun Spartans. In the Cup-Winners Cup Manchester United have tough opponents in Dukla Prague.

7 There is a mass exodus at Coventry. Steve Whitton is the fifth to leave recently – joining West Ham United. Larry Lloyd, sacked by Wigan Athletic in April, is appointed manager of Notts County.

9 International F.A. Board meeting in London makes alterations to the Laws of the Game. Limits of air pressure in the ball are broadened, and more importantly, the wording of the Law covering a goalkeeper in possession of the ball is altered to to make it clear that he must release it into play after retaining possession while taking more than four steps. 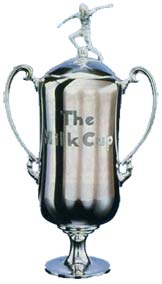 22 Spurs will stage first live TV Football League game – v Nottingham Forest. This is first of 10 such games in agreement between League and ITV.

5 Oldham defender, John Ryan, is transferred to Newcastle United in £225,000 deal. Bobby Gould (Coventry City), one of the busiest managers in the transfer market this summer, signs two players he discovered while in charge of Bristol Rovers – Graham Withey and Nicky Platnauer – joint fee £35,000.

14 Coventry part company with another of their players – forward Jimmy Melrose returns to Scotland with Celtic in £100,000 transfer.

15 Michael Robinson, Brighton’s top scorer last season, is transferred to Liverpool for £250,000. He was reported to have cost Brighton £400,000 when secured from Manchester City in July 1980. 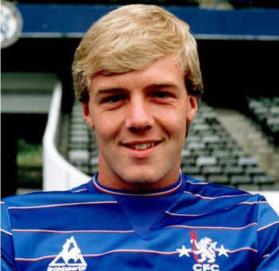 17 League tribunal decide that Leeds must pay Celtic £140,000 plus VAT for George McCluskey.

Throughout the 2017/18 football season I will be contributing to the Wrexham AFC matchday programme. I will be penning a feature called Memory Match, a look back at classic Wrexham games from the past that I will share in this blog over the coming months.

This is the third successive season that I have been writing the Memory Match column. Indeed, when I have written a Memory Match for every Football League season I would like to compile all the columns into a book that will reflect the rich history of my beloved football club.

Despite a first round exit in the League Cup – thanks to a 2-0 defeat against Crewe Alexandra at Gresty Road – we were still unbeaten in the league as we travelled to Hillsborough to take on Sheffield Wednesday.  After being promoted the previous season, we continued our fine form at this higher level to extend our unbeaten run to 18 matches.

Roared on by 2,000 travelling fans, the afternoon started badly when Paul McLaren headed down for Alan Quinn to score from outside the penalty area with a dipping shot after two minutes. Maybe Wrexham goalkeeper Andy Dibble could’ve done better, but he was forgiven by supporters as it was the first goal he had conceded in seven matches. The previous Saturday had seen Dibble equal a club record of six successive clean sheets – previously held solely by Gordon Livsey.

Seemingly in control, Wednesday striker Grant Holt stuck the ball past Dibble from former Wrexham loanee Terry Cooke’s free-kick in the 28th minute, only to have his effort disallowed for a foul in a crowded penalty area. Moments later Shefki Kuqi saw a shot blocked at the expense of a corner.

Wrexham were struggling to cope with the strength and pace of the home side’s two strikers and Holt muscled himself another opportunity, his shot flashing dangerously across the face of the goal.

Minutes later, Kuqi overpowered Shaun Pejic but Dibble spread himself well to prevent what would surely have been the final nail in Wrexham’s coffin, even at such an early stage of the game, as the visitors were forced to defend desperately.

Six minutes before the break though, the visitors were back on terms. Our hero was Dennis Lawrence, who had scored the winner in our previous match against Brentford. In an almost carbon-copy re-run, he went forward to meet Ferguson’s corner and his downward header found the net.

Wrexham snatched an unlikely lead in the 53rd minute through Chris Llewellyn. The former Norwich City striker breaking from half-way before linking with Paul Edwards and taking the return pass to curl a superb shot beyond Ola Tidman from 20 yards.

Wrexham went further ahead in the 64th minute thanks to a fine solo goal from Carlos Edwards, who cut in from the right to drive the ball low into the bottom corner of the net.

Wednesday were on the ropes but they didn’t give up without a fight. The Owls suddenly regained their composure and confidence to battle on for the final gut-wrenching 11 minutes. Alan Quinn’s cross was punched away by Dibble for substitute Paul Smith, whose toe-poked effort struck a post and went in off the unfortunate Brian Carey.

This was the last significant action of an entertaining afternoon that saw the Reds gain a valuable three points.

Assistant manager Kevin Russell said: “We weathered the storm in the first half when they put us under a lot of pressure.

“We dug in to the game and we had our fair share of chances in the second half we controlled the game with an excellent performance.”

“We couldn’t have had a worse start, but it just shows you how much character we’ve got in the squad at the moment.

“We’ve got a very small squad, a vey young squad, but the one thing about it is that we are hard to beat. We are a tight unit and today I thought they were very, very good.”

The win took the Dragons up to second place in the league table – with the same number of points as leaders Barnsley and with only goal-difference separating them.  Unfortunately our early season promise did not last, although we finished the season in a respectable 13th position.